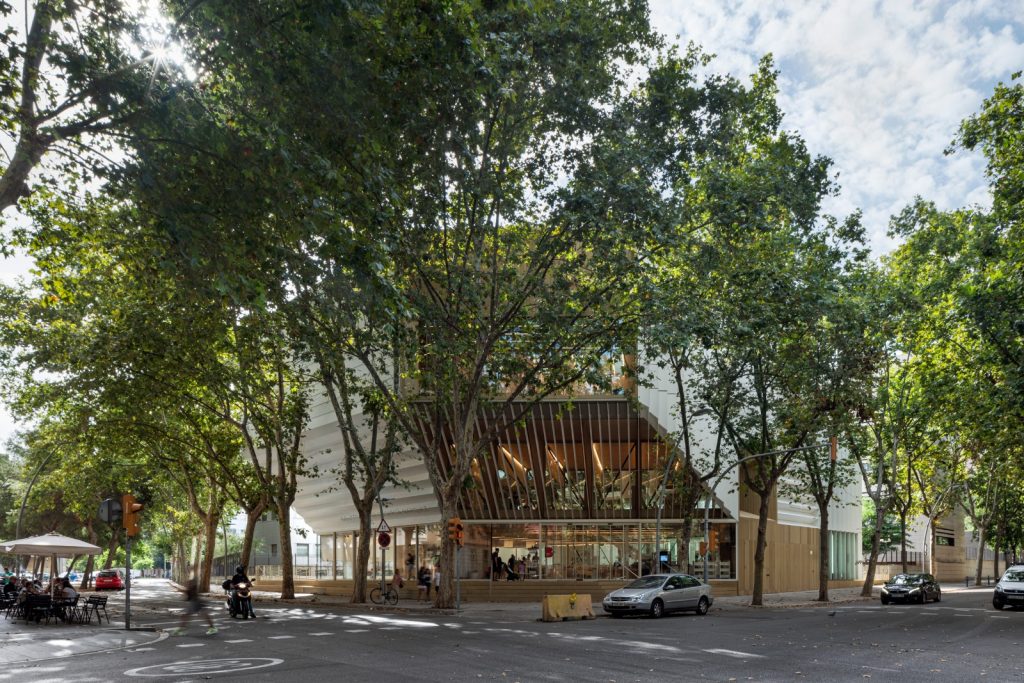 In the Sant Martí district of Barcelona, it was necessary to establish a facility that would become a new pole of cultural attraction in the district, a pioneering library in its conception that would reinforce the functions of public libraries as agents of sustainable development by guaranteeing ‘universal access to knowledge, culture’ and the impetus of community life. A people-centered, environment-transforming library that materializes in areas of strategic action: users can discover, learn, create and share.
The district library network was complete, except for the central district library, where there was only a small library from the 1980s, which since the late 1990s was planned to be expanded to more than 2,000 m2. With this new equipment, the opening of libraries in this area of the city was to be completed. With the construction of the Gabriel Garcia Márquez Library, the planned planning is more than satisfied and makes the services of a 21st century library compatible with the specifics of the environment in which it operates.

It is a unique district library, located in a dense urban node of the city of Barcelona, ​​which is presented as a sculptural volume inspired by stacked book blocks and set on a square slightly raised above the street and whose large holes and voids dialoge with the environment.

The access arcade extends the pedestrian and cultural axis of the neighborhood and connects with the interior. The facility has 4,294 m2 built distributed over 5 floors, with a central patio that connects all of them and brings natural light to the heart of the building. This large void also acts as a solar chimney, a form of passive design that is particularly effective in humid and hot environments, which absorbs solar radiation, heating the air inside, which rises and is ventilated at the top, creating air circulation. as a method of natural ventilation.

The architectural program is intensified and dynamic as it acts as a true social condenser, it has captured and intensified situations that foster the experience of information, the exchange and production of knowledge, as well as social phenomena that occur continuously in its surroundings.

The structure is a hybrid of laminated and cross-laminated wood and steel, maximizing structural efficiency and architectural performance. Its configuration is based on three cores connected with lattice beams, with an unusual volume of exposed wood and hidden joints. The structure defines and qualifies the space without apparent tectonic efforts and integrates with the program, the envelope and the furniture of each ecosystem of the library. The result is a great work of cabinetry, with a presence that is as warm and light as it is permeable and luminous.

These materials were introduced as new paradigms of circular construction, they have defined a path of cyclability. The composites formed by polyurethane resins and fiberglass that shape the facade slats, as well as those formed by vegetable fibers and a polymeric compound that make up the openings in the holes in it, when their useful life in the building ends. They can be reused, repaired or recycled.

The building is part of a new model of production and consumption where resources and materials are permanently recycled and waste is minimized to the maximum, thereby extending the life cycle of products. Increasing the sustainability of the project by reducing the carbon footprint and greenhouse gas emissions and accelerating the construction process thanks to industrialization and prefabrication.

The library has a multipurpose room with a capacity for 100 people, a kitchen for holding workshops and for public use by users, a screening room with bleachers in the children’s area, a multimedia classroom for 12 people, a training room for 15 people, an outdoor patio on the basement floor, and two outdoor terraces on the upper floor. The building also houses the Associative Historical Archive, as well as the radio studio of a local radio station.

It is equipped with an automated lending machine with 5 trolleys.

The Library offers the services offered in the city’s library network: information, loan of documents, Internet and Wifi access, training and learning support, ICT courses and workshops, activities to promote reading and culture for children and adults, transfer of spaces, work with schools, professional visits, etc.

At the time of its opening, the library had a fund of 40,000 documents, an important part of which came from the old library. With the inauguration of the new building, new centers of interest have been created: Gabriel García Márquez, Hispano-American Literature (Hispano-American authors who have lived in Barcelona), and Journalism and literary chronicles. Those that the old library already had are also kept, among which the Francisco Ibañez Fund stands out.