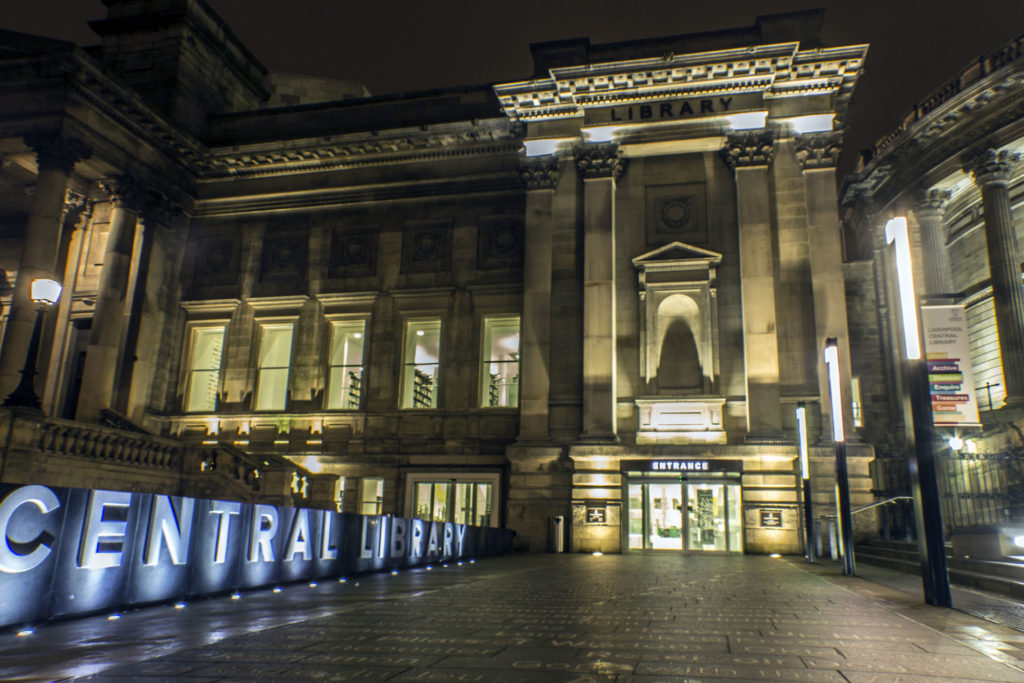 A new and more prominent entrance with improved landscaping and signage and a 24 hour book return facility.
A dramatic atrium which brings in daylight and invites people to understand what is on offer and to explore the whole building fully.
Improved links to historic buildings such as the magnificent Picton Reading Room, Hornby Library and Oak Room, which have been fully restored and returned to their original glory. They are now open at all times when the library is open and include showcases to display archives as well as the library’s extensive special collections.
Increased numbers of computers and some I-Pads with free access and 100% Wi-Fi coverage inside and outside the premises.
Increased numbers of self-service machines.
An excellent Children’s Library and performance space in a restored area of the building which had been closed off for some years.
A purpose-built standalone repository which meets all aspects of BS5454:2000. As well as an electronically powered mobile shelving system installed by Bruynzeel, the repository has four hour fire protection and an automatic gas fire suppression system. For the first time, there is a Document Reception area and vastly improved staff accommodation includes a well-equipped Conservation Studio and a Cataloguing Room, both benefiting from natural northern light.
More spacious archive visitor facilities including a sound-attenuated interview room for confidential enquiries, more pcs, a display space including new showcases, and a well-equipped, sound –attenuated Searchroom.
A cafe with an external ground floor terrace attracting users to the building and animating the street.
A roof terrace open to all users with panoramic views across the city and over the restored historic buildings.
A high standard of accessibility throughout the building, baby change facilities on almost every floor and an adult change facility, and induction loops.
A combination of well-equipped meeting rooms.

The library is located in Liverpool city centre, in the Cultural Quarter of the city and on the Liverpool World Heritage Site.

A blend of old and new on an existing site which is a Grade 2* listed building. There is a rectangular new-build public space behind an original 1860s façade with poured in-situ concrete. This has a spectacular atrium with a wow factor and off-set staircases to bring in daylight and encourage people to explore the building fully. There are also north and south light-wells. In addition, there is a rectangular new-build repository with poured in-situ concrete, double thickness walls and aluminium cladding. This meets archive standards such as PD5454 for storage and long-term preservation of archives and special collections. There is a restored magnificent circular 19th century reading room and adjoining restored early 20th century buildings. Underneath this is a circular room dating from 1880 which has been restored and converted for use as a children’s library and also as a lecture hall and performance space. There is a refurbished 1930s library closed access stack.
It is a fully accessible building.
The BREEAM rating of very good has been achieved for both new and historic areas.