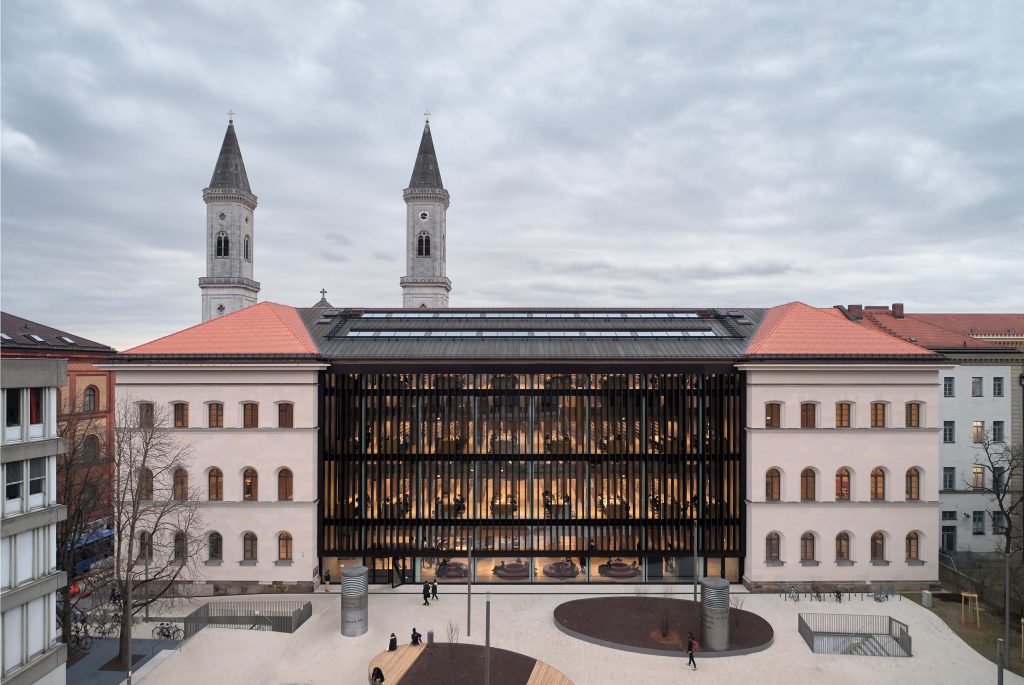 In 2019 the University Library of the Ludwig-Maximilians-University in Munich opened its largest subject library to date, the Philologicum. The new building unites ten libraries of the Faculty of Linguistics and Literature under one roof, offers 740 workspaces for numerous different uses, and houses approx. 400.000 volumes.The original building in Ludwigstraße 25 was designed and built from 1833 to 1835 by Friedrich von Gärtner, one of King Ludwig I favorite architects, as an Institute for the Blind. After World War II the building was given to the Ludwig-Maximilians-University. Its first major renovation was completed in the 1960s, to house offices, lecture halls, seminar rooms, a theater and last but not least several small libraries.
It had been a long-standing wish to unite the smaller subject libraries of the faculty within one large, modern subject library.
In 2016, after only two years of intensive planning and preparations, the existing building was completely gutted, only the listed outer walls remained standing. The new building structure was then constructed, including a new façade where the 19th century walls had been destroyed during World War II.
Up until 2019 all 10 subject libraries of the faculty had been located in six different buildings spread throughout the neighborhood. Due to its location next to the faculty buildings and just across the street from the Main Library, the Philologicum instantly became an essential site to students and staff.

Structure and zoning:
The new structure includes four main levels, with high ceilings alternating with mezzanine levels with only half the ceiling height located in the building’s core. The room heights of the main levels correspond to those of the historical parts of the building in order to maintain the original generous room space and allow a maximum of daylight in.
The architects’ objective was to create an abstract image of a bookshelf with a subtle reference to the underlying use.
Horizontally the new library is divided into three different zones offering different working environments. One zone (Silentium) offers absolute silence. The middle section is a classical reading room area. The zone opposite the Silentium at the other end of the building is a group study area with flexible furniture and sofas to support spontaneous collaborative work and communication.
The new library houses over 700 workspaces of various kinds to accommodate the different needs of the library users:
– reading room workspaces
– silent reading room workspaces (Silentium)
– group study areas (Forum) and rooms for small groups (4-6 people)
– single study rooms (carrels)
– Parent-child-study room
– Room for the visually impaired
– Function room for up to 60 people
– Classroom
From the outset, one of the other central requirements of the room concept was to create workplaces for the different needs of student and scientific work with appropriate equipment, to define quiet or rather noisy areas in particular and to provide individual and group work rooms.
Signage, wayfinding and visual identity
An integral part of planning was to represent the identity of the faculty in the new library building. For this purpose, a graphic designer developed the idea to display as many languages and types of alphabets taught at the faculty as possible, through quotes of world literature, supplemented by graphically appealing elements of syntax analysis. All quotes are fixated on glass elements (walls, doors) and work both as style element and as run-through protection.
Materials:
The most prominent and dominating material on the inside is wood. Flooring is massive oak parquet (unplaned surface, oiled). Paneling for all walls is oak veneer with micro perforation for better acoustics. Bookshelves and all fixed desks are oak veneered and, planned by the architects specifically for the Philologicum in close collaboration with the University Library, represent an essential design element. Glass is used wherever possible to allow natural light to flood the rooms. These elements are characteristics of Cukrowicz-Nachbaur Architects.

The Philologicum is a new building built in the remaining walls of a declared historic monument from the 1830s, combining historic an modern architectural elements.